2 By Bukowski ‎– Her Kind Fight Everything LP White Vinyl

The story of Her Kind Fight Everything starts in late August 2017, when the current members of the band got together for the first time to rehearse for a show in Berlin. You’ll sometimes hear about the rare, almost metaphysical tuning that can occur between musicians, resulting in magic. That week’s sessions were shrouded in this elusive musical alignment, as was the live show that followed, with its chaotic rendition of Solution: Sarrus leaving the follow up acts treading scorched earth. What came after is what 2 by bukowski refer to as the Singles Trilogy years and various pre concert practice sessions that often drifted off to the band’s longform, Cinematic Drone Ambient meets Doom side. November 2019 saw those jams having morphed into a conceptual live show which 2 by bukowski performed at Zukunft am Ostkreuz in Berlin. By This Time it was becoming obvious that 2 by bukowski had an album on their hands. An unseasonably warm February 2020 found the band holed up in an Athens basement to record Her Kind Fight Everything, live, in three days of good food, bad beer and hard white spirit fueled experimentation. True to 2 by bukowski’s pathological inability to be pinned down to a genre, Her Kind Fight Everything spans decades and genres – from ‘70s Kraut rock, to 80’s Ambient, to 90’s Doom and ‘00s Drone Rock. For those about to venture in dark, grandiose introspection, we salute you.

2 by bukowski was formed in 1997 in Thessaloniki, Greece. They have released material under many labels such as Liquefaction Empire (UK), Jonathon Whiskey (UK), Poeta Negra (GR), Inner Ear (GR) and others. Their albums with Poeta Negra are considered seminal material and still appear in lists of the best alternative Greek albums of all time. 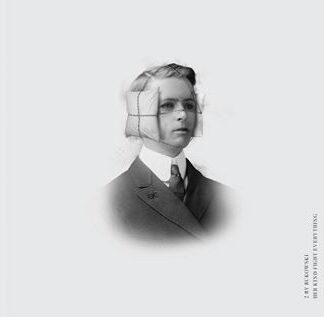 You're viewing: 2 By Bukowski ‎– Her Kind Fight Everything LP White Vinyl €24,00
Add to cart
This site uses cookies: Find out more.