The Anunnaki debut album originally came out back in 2017 in a ridiculously small handmade edition of only 111 copies and was not available in Europe except for the small number (15?) Cardinal Fuzz had for sale. Anunnaki decided to give it the remaster/reissue treatment for it’s 5 year anniversary. ‘Two Treatise On Gnostic Thought’ is now back in print on BLOOD RED vinyl, packaged with redesigned artwork featuring the Christiophe Szpajdel logo on reverse board jackets, with a 1/0 insert. Imagine a cross between Motörhead’s Lemmy and Philthy Animal and Kraftwerk’s Ralf and Florian, together channeling the kozmik vision of Alice Coltrane through Sunn O)))’s amplifiers, and with influences varying from Klaus Schulze to Acid Mothers Temple, from new age to black metal, Madame Blavatsky to Thich Nhat Hanh, and you’ll start to get the idea of what Anunnaki is all about. Limited to 250 copies. 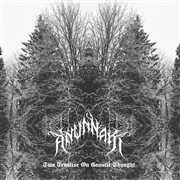