BACK IN PRINT! ‘Pewt’r Sessions 1-2’ collects two limited vinyl-only Causa Sui albums originally released in 2011. The two albums, released in April and August respectively, both features American musician Ron Schneiderman and both sold out immediately after release. Ron Schneiderman from American impro-rock collective Sunburned Hand Of The Man first got together with Danish stoner/kraut/jazz ensemble Causa Sui in December 2006 for a loose, improvised gig at the old cinema at Christiania – Copenhagen’s autonomous, and notorious, free commune. The recording of this gig was released the following year, under the curious bandname Pewt’r jjjjj, and became widely admired among fans of free-form psychedelic rock for its updated version of late 1960s/early 1970s freak-out bands such as Blue Cheer, Guru Guru and Ash Ra Tempel. In the early summer of 2009 Ron Schneiderman was back in Denmark, this time for a three-week stay as co-curator of the art-and-music event Festival of Endless Gratitude. During this period the group was united again for a few shows and a couple of recording sessions in Causa Sui’s studio in Odense, which resulted in the Pewt’r Sessions albums. These records consists of loosely structured sun- and beerfueled jams that were later edited and mixed by Causa Sui guitar player and producer Jonas Munk. While all the psychedelic fury from the Christiania live recording is still very prevalent on these studio sessions, they also see the group channeling into new territories, such as pieces heavy on analog electronics and motoric grooves. ‘Pewt’r Sessions 1 and 2’ are albums that could only be recorded in an impulsive mode. Yet there is an alternative kind of structure taking place in almost every piece – some intuitive, almost psychic connection, which moves the sounds from one place to another. The centerpiece from these sessions, Garden of Forking Paths, gloriously sees the band fully exploring the potential of free rock, all participants working at the height of their ability, slowly jamming a gentle bass-groove into a psychedelic beast that sounds like the missing link between Electric Ladyland and Can’s Tago Mago. Tracks such as Streams of Gratitude and May Sun are more delicate pieces where the group explores the hazy, sensual side of cosmic rock, while the 12 minute pulsedriven Gelassenheit sees the group paying hommage to the sound of Düsseldorf. -Ron Schneiderman has been a prime mover in the so-called new weird America movement for decades, especially as member of Sunburned Hand of the Man and as head of Spirit of Orr Records. He lives in Brattleboro, Vermont. -Causa Sui consists of Jakob Skott, Jonas Munk, Rasmus Rasmussen and Jess Kahr, and have released five albums since 2005 – most notably the trilogy set Summer Sessions that saw the band move away from the heavy psych of their two first albums to more abstract, instrumental sounds that owes as much to electric Miles Davis or Can as to American stoner-rock. 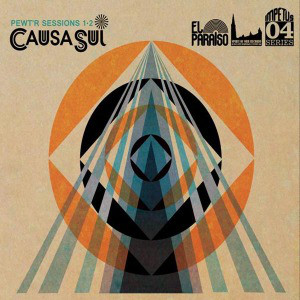