“My Cat Is An Alien are the brothers Roberto and Maurizio Opalio, who have been spreading their unique brand of mysterious guitarnoise improv across the globe for ten years. Pestrepeller are a barely-existing band of part-time musicians from the UK. The core trio is Harley Richardson, Ed Pinsent and Savage Pencil, occasionally joined by guest musicians. The band started life as Ultrasonic Attack Wave Pestrepeller around 1995 or 1996, and made Rodent and Insect Eliminator for Sympathy For The Record Industry. Sonic Boom, the genius behind Spaceman 3, remade this early record by processing it through his VCS3. Apparently he liked its complete lack of musicianship. A second LP Nug Yar was a limited press LP for Gary Ramon’s Prescription label and sold out instantly, because only 99 copies of it existed and the print run was pre-sold to Coil fans. The trio played live in London precisely three times. Soon the band split up in acrimonious circumstances due to artistic disagreements, but reformed about two years later, met in the studio and recorded what became Isle of Dark Magick with Peter Hope-Evans, the blues harmonica player who used to be in Medicine Head in the 1970s. This session was released on CD by Important Records in 2006. Pestrepeller meet, play and record very infrequently, because they don’t have enough time outside of their other pursuits in work, life, and art.” 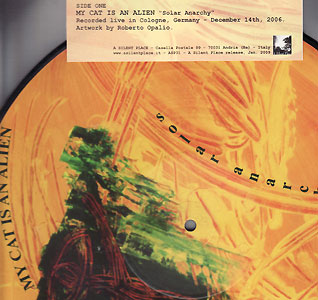 You're viewing: My Cat Is An Alien / Pestrepeller ‎– Solar Anarchy / As Wolf LP Picture Disc €5,00
Add to cart