When Robert Hunter, the poet and writer who provided the Grateful Dead with many of their vivid and enduring lyrics, passed away on September 23rd, 2019, many took to the internet to grieve, but for William Sol (Prana Crafter) and Joel Berk (ragenap), their sorrow required a wholly different outlet. Unknown to each other, they both respectively took to the solitude of their jams to express their mourning privately. The following morning, happening to compare notes, they discovered how they had both similarly sought and drank from the same fountain waters as tributes to such a pronounced loss.
Prana Crafter’s ‘Beggar’s Tomb’ emerges from a cloaked light, with the stir of a brimming cauldron. Summoning drifting guitar textures that slowly interweave to open celestial doors, Sol quickly establishes a profound communication to channel the subconscious mechanism. With Ragenap’s ‘NightFall’ on the flip-side, Berk initiates an opening ritual to dilate the receptors for zone glossolalia. Seared tones slowly entwine, churning hypnotically as thick devotional haze envelope the senses, which Joel builds in deliberate detail. Only a few available! Limited to 350 copies on black vinyl. 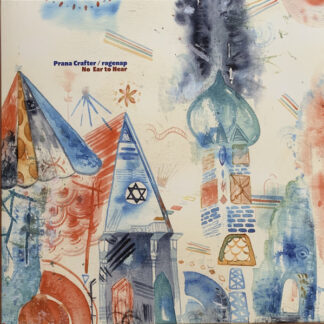