Spin Spin The Dogs – Leave Me In Leicester LP

Spin Spin The Dogs are in the house! Formed a while back, this London based avant rock band have been doing the rounds for sometime, finally settling on a solid line-up that includes original members Vincent Larkin, Dean Hinks and John Wilson and new addition Luke Younger of Birds Of Prey/delay/etc infamy. Musically the group sit somewhere amongst the murky worlds of post punk, avant rock and good old rock’n’roll making up new rules as they good along. Songs build themselves into a frenzy before tripping over themselves in all the excitement and confusion with Vincent Larkin’s odd musings leading the group into ever more curious territory. They are not unlike quirky, guitarless progsters Cleckhuddersfax especially on ‘Digging and Driving’ but they also share alot in common with The Fall, Pere Ubu and other scatty yet ingenious rock outfits. ‘Leave Me In Leicester’ is yet another notch in the Gringo records belt and a fine example of the occasional greatness of uk guitar bands. Very nice 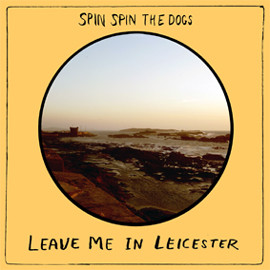 You're viewing: Spin Spin The Dogs – Leave Me In Leicester LP €10,00
Add to cart