300 limited vinyl with screen printed sleeves / digital download. We are only getting 70 copies. Long-standing noise-rock duo That Fucking Tank return with a mini-slab of their first new recorded material since 2011 s TFT. Breaking off from the math-rock scene they helped create in their early days in the mid 2000s the new record gives a taste of a less bludgeoning, more groove-based, version of their baritone guitar and drums instrumentals. Lead track Chumbawambanger takes its cues from postpunkers Dog Faced Hermans and The Ex, mixing an off kilter loop with afro-beat rhythms and effects-laden guitar played through three separate amplifiers. The layers of textures and melodies create a weighty power that owes more to congotronics than the metallic riffs and power chords of their noise-rock peers. Pigeon Club is a more conventionally Tanky affair with the tongue-in-cheek Rush-esque two-hand tapping and stabbing stops and starts long term fans will be familiar with. This gives way to a harmonics soaked outro indebted to Come To Daddy and Windowlicker era Aphex Twin. The digital download of the record includes a long-form ambient electronics remix by GameProgram, the alias of Hookworms and NOPE drummer Jon Nash. That Fucking Tank is the duo of Andy Abbott (baritone guitar played through multiple amplifiers) and James Islip (drums). They formed in 2003 in Leeds and fast became a staple of the city s vibrant DIY music scene. From the outset TFT toured regularly across the UK and Europe playing unusual spaces and venues ranging from houses, social centres, squats, barns and boats to tours and support slots with contemporaries like Vialka, Lightning Bolt, Q and Not U, Hoover, Hella, Don Caballero, US Maple, Melt Banana, Whitehouse, The Fall and The Ex and appearances at large-scale festivals including Leeds and Reading in 2008, a tour of large-capacity venues supporting Foals in 2014, and a tour of independent venues in China in 2015. 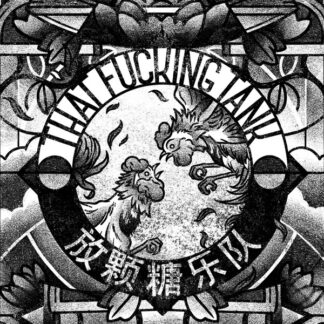