‘EXCAVATED HEAVY METAL FROM THE ERA OF EXCESS’ – By now you’re probably familiar with Riding Easy’s wildly popular ‘Brown Acid’ series of rare, lost and unreleased proto-metal and stoner rock singles from the ’60s-’70s. In the endless pursuit of those glorious gems, we often uncover equally brilliant rarities from the late-’70s to late-’80s Golden Age of Heavy Metal that also just must be heard, but they don’t fit the series’ aesthetic. ‘Scrap Metal, Volume 1’ collects some of the greatest unknown and lost heavy metal tracks, long buried beneath the avalanche of the era’s classic output. We all know the old adage that history is told by the winners. But sometimes the losers tell the best stories. And while none of these bands found fame and fortune, this artifact and the volumes to come are testament to the enduring power of heavy music. You can hear the blood, sweat and beers that went into each of these singles. The recordings may be low budget, but the inspiration and talent is immutable. Not only are the amps turned up to 11, the boyish sexual innuendo is cranked to 69. You can hear the convergence of influences – NWOBHM, thrash, glam metal, doom, etc. – colliding at once as the era birthed a wellspring of subgenres. Many of these singles are self-released and were thus limited to a small run of copies. Those that remain are hoarded by collectors and sold for exorbitant amounts. Riding Easy has collected the best of the best for you here. As with ‘Brown Acid’, all of these tracks are licensed legitimately and the artists all get paid. Because it’s the right thing to do

Be the first to review “Various – Scrap Metal: Volume 1 (Excavated Heavy Metal From The Era Of Excess) LP” Cancel reply 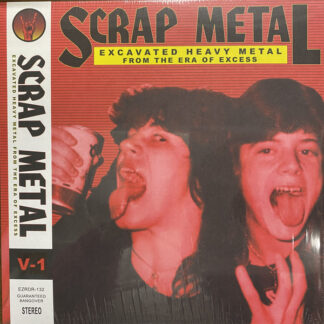