Oblivion Reptilian is a collaboration between Andrew Panagopoulos (Drums-Percussion) from Australian heavy space rock band COMACOZER and Mike Vest (Bass/Guitar) from legendary bands such as BONG, Blown out, 11Paranoias, Melting Hand, Lush Worker. With Comacozer and Blown Out releasing a split LP in 2018 which sold out in a week, Mike and Andrew had an idea of let’s do a project together. Obviously the initial question was, ‘How the hell to do this from opposite sides of the globe?’ but thanks to modern technology and creativity it happened. Was an interesting exercise indeed to record this slab but with huge amounts of improvisation and similarity in influences ‘Fried on Rock’ came together quite fluidly. Mike worked his magic with guitar and bass plus mixing the tracks and the results are fantastic!

Obviously both Andrew and Mike have their own tones and style and drawing influences from their other projects but in saying that OBLIVION REPTILIAN comes into its own. With their ‘Fried on Rock’ debut, better be prepared for 5 tracks of instrumental space rock, fuzz and feedbacker glory, along with some haunting breakdowns and mid tempo melancholia.

‘Fried on Rock’ has the amazing album artwork and design by Anthony Downie, who just nailed the theme and feel of Oblivion Reptilian.

With a wide range of influences, such as Jojo Hiroshige, Helios Creed , High Rise, Hendrix, Holy Angels, Okhami No Jikan, be prepared for some tripped out noisy psych tunes. 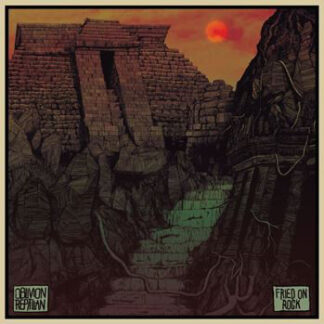