The Canadian ‘Assault’ edition, remastered and reissued on heavyweight splatter vinyl, with kind permission from the band! Dating back to the period 1985-1987, Venom’s ‘Assault’ series collected both studio material and previously unissued live recordings. Officially the ‘Assault’ issues were meant as limited edition souvenirs of each of the band’s overseas jaunts. Back in the day the band only agreed on the US, Canadian and Japanese EP’s. The EP’s that appeared in Germany, France and Scandinavia were bootlegs. With no les than 50.000 copies sold, this Canadian release reached gold status! 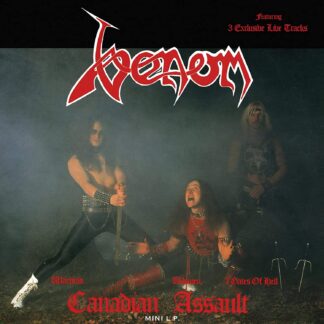