Craig Smith was an extraordinarily gifted songwriter and musician who seemed poised for a successful career in the 1960s music business, until his life was derailed by drugs and schizophrenia. In 1969 clean-cut, charismatic Craig Smith became Maitreya Kali, a dark, disturbed psychedelic Messiah figure. He laid out his strange vision on a self-released double-album ‘Apache/Inca’, which went on to become one of the most sought-after artifacts of the psychedelic era. He died homeless on the streets of Hollywood in 2012. His story was told in Mike Stax’s critically acclaimed book ‘Swim Through The Darkness: My Search For Craig Smith & The Mystery Of Maitreya Kali’, published in 2016 by Process Media. But his story does not end there. ‘Love Is Our Existence’ presents a selection of Craig’s unreleased music. Professionally recorded in Los Angeles studios between 1966 and 1971, these previously unheard songs reveal a singer and songwriter of breathtaking depth and talent. Painstakingly remastered from acetate discs and master tapes, these songs have the same haunting, otherworldly quality heard on the ‘Apache’ and ‘Inca’ albums. This deluxe edition was pressed on high quality vinyl at RTI and comes in a classic-style “tip-on” gatefold jacket with previously unseen photos and detailed liner notes by Mike Stax. Limited edition of 500 copies. 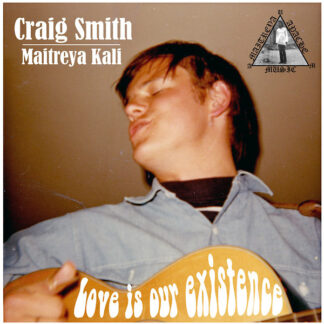 You're viewing: Craig Smith – Love Is Our Existence LP €35,00
Add to cart
This site uses cookies: Find out more.