It looms into view through the fog. much like a metaphysical force from the celluloid revelations that dwell in our memories and haunt our subconscious. A twisted morass of circuitry and flesh, binary chill and visceral barbarism. Necro Deathmort have created a monster, and it’s both a malevolent and magical thing to behold. It’s name is The Capsule.

This two-man aural manifestation came to life towards the end of the last decade, starting originally in the words of co-conspirator Matthew Rozeik “as an abortive attempt to do a ‘regular’ rock band, born from jamming in studio downtime when our drummer was AWOL” Drawing on influences ranging across the spectrum from Ed Rush & Optical to Old Man Gloom and from Autechre to Neurosis, he remembers that the unspoken objective for himself and cohort AJ Cookson was “to make electronic music that was as heavy as doom metal, with absolutely filthy bass.”

Moreover, the duo have proven frighteningly prolific, releasing a total of ten releases both on Distraction records and on Rozeik’s own Extreme Ultimate label, which arrive at a wide variety of tense and transcendental mental landscapes. Yet The Capsule marks the band’s first for Rocket Recordings, and it’s a step yet further into the terrifying vacuum of space.

“We’ve stopped caring that each new release might alienate fans of a previous record” notes Rozeik wryly. “I think it’s contributed to the longevity of the band, as we have a large well of inspiration from which to draw.” True to form. whilst this album’s opener ‘In Waves’ maps out rhythmic terrain somewhere amidst krautrock groove and techno relentlessness, it’s not long before matters take a turn into the unearthly, with dreamlike extrapolations like ‘Mono/Serum’ – redolent of nothing so much as Mica Levi’s otherworldly soundtrack to Under The Skin – sharing space with the threatening momentum of the more overtly metallic ‘Moonstar’. Yet at all times The Capsule is a work of fierce cohesion and compelling intensity.

Whilst there may be three words for death in this band’s initially playful name, Necro Deathmort have proven themselves well versed in infinite varieties of the macabre. What’s more, in The Capsule, no-on can hear you scream 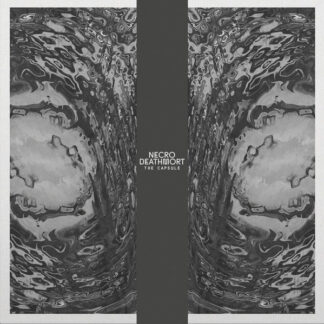